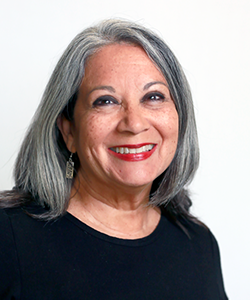 Our Featured Interpreter this week is Janis Palma.  Janis is an English-Spanish interpreter and translator with over 40 years of experience. She became federally certified as a judiciary interpreter in 1981, certified by NAJIT as an interpreter and translator in 2004, and is licensed by the State of Texas as a Master Court Interpreter as of 2017. Ms. Palma has worked as an independent contractor for private attorneys, government agencies, state and federal courts, and worked as a staff interpreter for the U.S. District Court in Puerto Rico for 15 years, from where she retired in 2017. She now lives in San Antonio, Texas. We asked Janis about her interpreting career and her session at the LEO’s 6th Conference in December.

Q: How did you start in the language industry?

A: I have always been mesmerized by Language and all the layers of meaning we can create, especially in literature. I was already reading Gustavo Adolfo Bécquer when I was about 10 years old and trying to write my own rhymes. When I got older, I found Pablo Neruda’s poems (and many others of his contemporaries) and started to play around with my own metaphors. Becoming an interpreter happened by chance, indirectly as a result of my studies of Spanish language and literature. I would say it was precisely those studies that made it so much easier for me to realize very early on that what I really needed to do was to find the meaning of what others were saying and then transform it into that same meaning in some other language. It’s what I have been doing for over 40 years now. 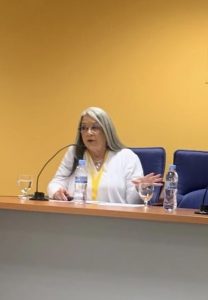 Q: What do you like the most about your job?

A: I love the never-ending challenge! Interpreting is like a treasure hunt. You have to know how to read the linguistic map—syntax, semantics, semiotics, pragmatics—that will lead you to the gold: the true meaning of what someone else is saying. But the challenge doesn’t end there. You then have to draw your own map to take you back to the other treasure: the gold you found, molded into a precious bracelet or necklace with the same value – the same message – except that it is going to look different from the original gold piece you found, or sound a bit different from the original message you heard, because it is now transformed into a different language. Even though I am working with other people’s messages, it is still a very creative process if you want it to come across as something authentic and believable, in other words, what the person would have said if they could speak the other language.

Q: What are the biggest challenges and how do you deal with them?

A: My biggest challenge is not having enough hours in a day to study and learn about all the new theories and discoveries and propositions put forth by scholars in this field. Every profession grows only to the extent there are people interested in exploring the unexplored, so they can produce new knowledge that helps practitioners be better at what they do. This is the knowledge that makes us experts in our chosen field. Theory and practice have to go hand in hand for interpreters in all domains and my second biggest challenge is finding ways to share with other interpreters, in forums such as the LEO Conference, whatever new knowledge comes out that may not be readily available to them otherwise. 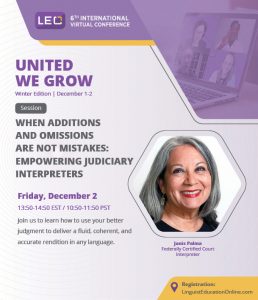 Q: At LEO6 you will present on additions and omissions for court interpreters. Can you give us a teaser of what the audience should expect?

A: Interpreters in legal settings are always told they cannot add or omit anything, but the truth is that we add and omit all the time because no two languages are identical or mirror-images of each other. I want to show interpreters when, how and why it’s permissible to leave things out or to expand on a rendition, and that it can actually be preferable at times in order to provide a smooth, coherent, and intelligible interpretation, particularly in the simultaneous mode. Education and health care interpreters are welcome to join because this topic can benefit their performance as well.

To learn from Janis and other outstanding speakers, join us in December for LEO’s 6th International Virtual Conference.