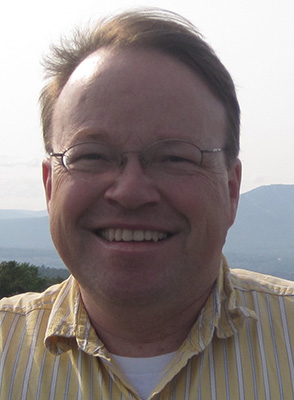 One of the main speakers at LEO’s conferences is Dr. Bill Rivers, who is a part of an acclaimed panel What the Future Holds. Bill is the founding Chair of ASTM Technical Committee F43, Language Services and Products, and chairs the U.S. Technical Advisory Group to ISO Technical Committee 232, Education and Learning Services. He serves as a member of the America’s Languages Working Group of the American Academy of Arts and Sciences, and is an honorary member of the Association of Language Companies.

Before establishing WP Rivers & Associates, Bills served for eight years as the Executive Director of the Joint National Committee for Languages – National Council for Languages and International Studies, leaving a legacy of significant legislative and policy accomplishments, including the establishment of the Congressional Caucus on America’s Languages, and the passage of the World Languages Advancement and Readiness Program, among many others. Today we asked Bill some questions about his background, career and what does the future hold for language industry.

Q: How did you start in the language industry?

By happenstance – I was in my dorm room at the University of Maryland in 1989, and the phone rang out in the hallway (there was one phone for all 25 rooms, in the middle of the hall). “Rivers – It’s for you!” So, I go out and pick up the receiver, and I hear “Are you Bill Rivers?” “Yes.” “And you are an Aerospace Engineering major?” “Yes.” “And you speak Russian?” “Um, who is this?” It turns out it was a professor of mine, Walter Melnik, and he asked me to come to his office the next morning at 8 a.m. I was a bit confused – I was carrying a solid B in his course on hypersonics – but I showed up the next morning in his office.

As it turned out, he had been contacted by colleagues of his at the NASA Goddard Spaceflight Center, which is about 5 miles east of the University of Maryland. They were looking for a “Russian translator,” as a delegation from the Soviet Space Research Institute – the Soviet equivalent of NASA – would be visiting in a couple of weeks. Professor Melnik gave me a number to call, and I did. It was for the Russian émigré owner of a small language services company, who interviewed me briefly and then told me to show up in a couple of weeks at NASA Goddard. This was the height of “glasnost” and “perestroika,” and there was a number of joint satellite projects, and I was about to get plunged into the middle of one.

I did, and was handed a microphone and told to “translate the speeches” of the directors of NASA and the Soviet Space Research Institute. I had no idea what I was doing – although I knew that I was interpreting, not translating.  The Soviet director spoke at a reasonable pace, and paused every couple of sentences, while the NASA director droned on and on. One of them at least was familiar with working with an interpreter. I ended up doing chuchotage at lunch and dinner, consecutive in working meetings of engineers and scientists. After a full day – no breaks – I was handed a sheaf of yellow legal loose-leaf paper – half in handwritten Russian, and the other half in English, and asked if I could bring a clean version of the draft treaty for this satellite project to the meetings the next morning. So, I wrote out two versions in longhand, caught a couple of hours of sleep, and handed them in. Again, I had no idea that there were professions called “interpreter” and “translator,” nor that there was any training for them, so I was easily exploited.

As it turns out, my invoice was never paid – the check bounced, and the agency skipped town, leaving no forwarding address. As green and raw as I was, I guess I did ok, because I was asked back several times (and paid, thankfully). When I recounted my story to one of my Russian professors, Dick Brecht, who was teaching a class on translation that year, he said “Bill, you’re an idiot.” This did not come as news, nor was it the first or last time I would hear that. He told me: “Go join the American Translators Association and learn something.” I’m still working on the second half of that instruction.

I worked as a freelance interpreter, translator, and terminologist, and later a staff translator at an academic publishing and exchange organization, for about seven years, while eventually earning a Ph.D. in Russian, and then working as an academic researcher and administrator, a researcher and operational leader in the Intelligence Community, as a contractor, and finally, for the last ten years as a language lobbyist.

Q: What does WP Rivers & Associates do?

My company provides government relations and strategic management consulting to the language industry.

Q: How did you establish the company? What was the most challenging in starting a business?

In May of 2020, I decided to step away from the Joint National Committee on Languages, a non-profit umbrella advocacy organization for the language enterprise in the US, and start my own company. Making that decision was the hardest part – with two kids at home, a mortgage, and all that – but once I got started, things moved quickly. I’m very happy in what I do, and the clients are fantastic.

Q: You speak French and Russian. Why did you choose to master these, not so easy languages?

Because I heard some Québécois French at home before I started school, it never occurred to me that it would be hard. I started learning French formally in kindergarten. I added Russian in high school, and by the time I started Russian I thought it was pretty easy – but that’s a common effect of being bilingual – learning additional languages isn’t as challenging as the second language. I took both French and Russian through college, and chose to double major in Russian and Aerospace Engineering. When I graduated, I had offers to go to graduate school in both subjects, and a job offer as an engineer. My undergraduate Russian advisor, Dr. Don Hitchcock, told me that I should do what I like best, so I picked Russian linguistics.

Since then, I’ve added Spanish, German, and Irish to the mix, through self-study and a week at the Concordia Language Villages for Spanish.

Q: What do you like the most about your work?

The language industry is an amazingly dynamic, lively place – it’s always changing, we’re part of every sector of the global economy, and what we do matters to the common wealth – we make lives better, we make the world a safer place, we advance the global economy by our work.

Q: What are your favorite books or movies?

Books – Doctor Zhivago, Master and Margarita (both are better in the original Russian); Ron Chernow’s biography of U. S. Grant, Guns and Steel by Jared Diamond.

Q: How do you stay motivated? Any tips on being successful and goal-oriented, especially during such trying times as these?

The motivation part is easier – I enjoy my work, and the people with whom I interact. The language industry is full of super smart, interesting people. As to success, a strong tendency to be stubborn in pursuit of one’s goals helps.

Q: You have been an integral part of LEO’s conferences from the beginning. What do you like the most about our conferences and what can be improved?

That’s very kind of you! I like the depth of knowledge, and the diversity of presenters and subjects. I don’t know what we could do to improve the conference – as much as I would like to see people in person, it’s LEO, and that online part makes it very accessible to a broad audience.

Q: Your panel will be talking about the future at  LEO’s 4th International Virtual Conference. Can you give us a glimpse of what to expect from this panel and the future? 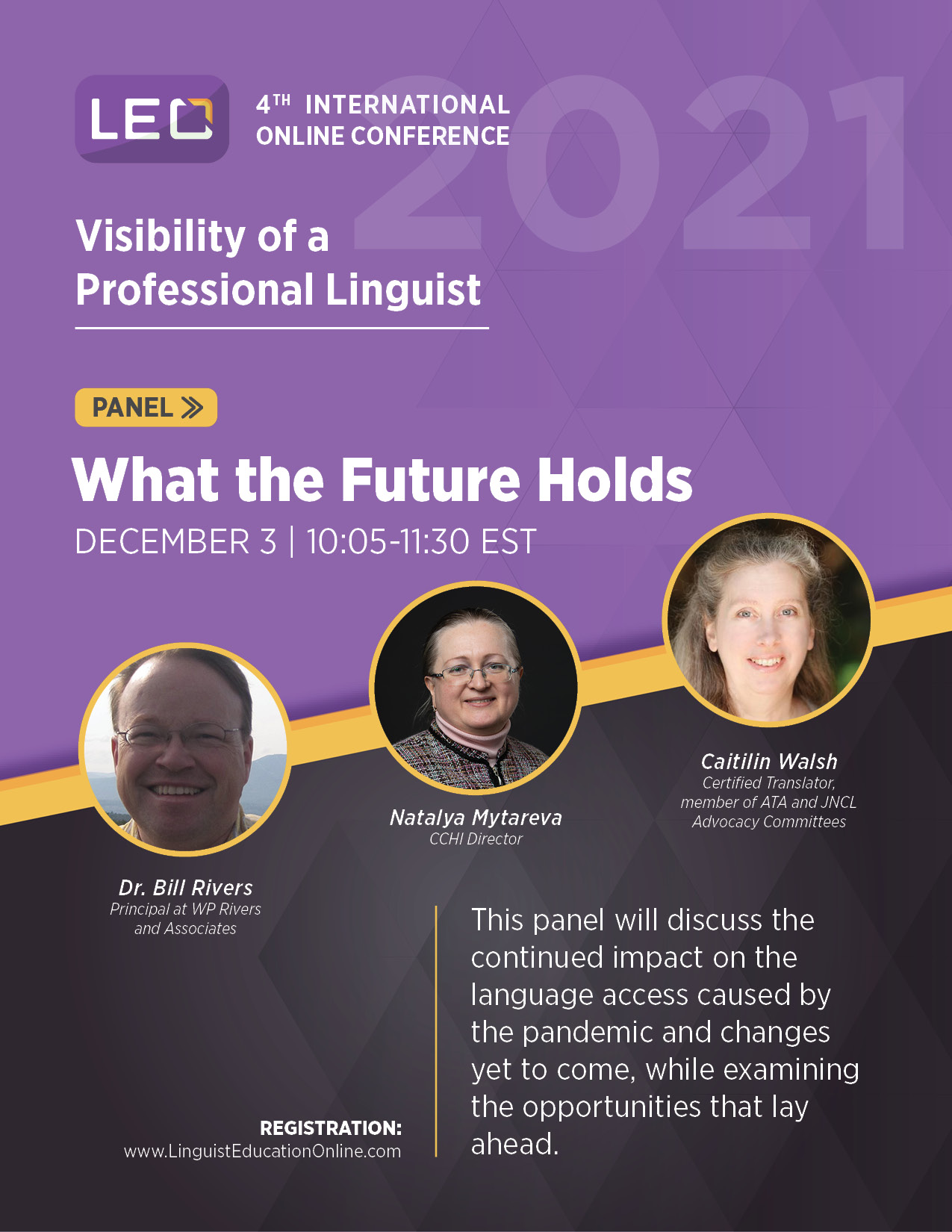 Well, I can only speak to my part of the panel – I expect smart and interesting and thought-provoking things from my colleagues, but I’ve no idea exactly what they will say. For my part, I think we will see a much more gradual evolution of the “new normal” than we might have predicted at the 3rd International Virtual Conference. We still have a long way to go before there’s a stable situation in regard to COVID-19, and that will impact global travel, the hospitality sector, and more. It’s also clear that we may well end up paying more for expertise, as the “great resignation” continues apace. Finally, virtual remote interpreting is here to stay, and that has pluses and minuses. On the plus side, language access for all kinds of services and events is now much more accessible than it was two years ago. On the minus side, we’re seeing clients asking for reduced minimums and rates, based on the virtual nature of interpreting, which is nuts – the same expertise is doing the same work, just not on site.